Dutchman Michael Kenis gave up his job as a web designer to fully concentrate on his company EigenPlectrum. Without any knowledge of the printing industry, he invested in two ValueJet 426UF LED UV printers. With these, he could finally achieve the delivery times and quality he craves. 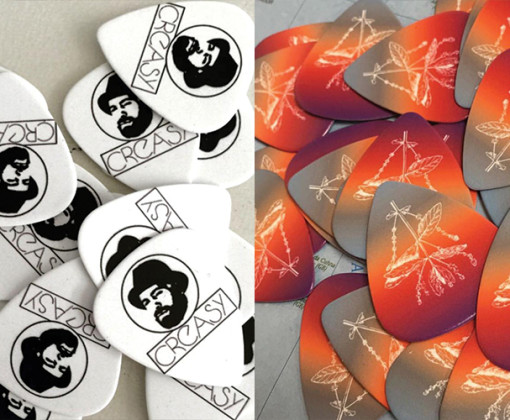 Bands such as Coldplay, Kiss, AC/DC, but also record company Sony Music and an organisation like War Child are just a few names to which the Dutch company EigenPlectrum delivers its products. The name of the company means ‘own guitar pick’ and that’s what it’s all about: unique custom plectrums. Owner Michael Kenis has come a long way: "You have to hit a few bumps in the road, before you know exactly what you want."

Michael Kenis wanted to order personalised guitar picks for his father who plays in a band. This turned out not to be easy. Eventually, he ended up with an Australian company. Michael decided to enter into a partnership with them by building a website through which people from Holland could order plectrums with a print.

“The delivery time was three to four weeks. The images, which were applied by means of pad printing, were OK, but somewhat grainy. And on every guitar pick there was always the name of the producing company. Which is unacceptable if you want something completely customised. Therefore, I purchased a desktop printer of Chinese manufacture, which could print directly on guitar picks. I worked from home at the time. But at a certain point this machine started to struggle. If I really wanted to invest, it had to be in a printer that could deliver good quality, which I can fully support. "

Because the professional printing industry was unknown to Michael, he started his research through Google. He compared several manufacturers of so-called object printers. After a demonstration of the Mutoh ValueJet 426UF, Michael was immediately sold on it. "The quality of this desktop A3+ flatbed printer is very convincing. I print the plectrums at 1,440 dpi, but even 720 dpi is already very good. The customer will probably not even see the difference in quality. Moreover, the highest resolution is 2,880 dpi. The ValueJet 426UF is a very capable model. I can put in the moulds for guitar picks very easily. Compared to other object printers, the print is more in the substrate instead of on top, which is very important for guitarists."

In order to promote his company, Michael approached many music stores and musicians. This way he managed to secure well-known names, with the first being the Dutch singer Ilse de Lange. He also contacted the guitarist from Adele's band and sent him a few samples, which got him an enthusiastic reaction. During a concert at the Ziggo Dome in Amsterdam, Michael personally handed the guitarist the order. For Adele he had a number of plectrums as a gift with a childhood photo of her on the front and her name on the back. "Once you're in the music world/industry, things start to snowball."

Besides Adele, Michael delivers not only to AC/DC, Kiss, Coldplay and Kensington, but also to Sony Music, KPN and War Child.

Michael: "Currently I have resellers in Germany, Switzerland, Sweden, France and the United States. To serve everyone online, I have websites in various languages. My knowledge of SEO (Search Engine Optimisation), keywords and Google optimisation comes in handy here, even though I have said goodbye to my job as a web designer and fully dedicated myself to my company EigenPlectrum."

At night Michael gets the best ideas for more products and writes them down. Now he also prints on the pickguards (scratchplates) of guitars. Furthermore, through EigenPlectrum you can order all kinds of accessories, from plectrum chains and plectrum keychains to guitar straps and business cards with press-out guitar plectrums/ picks. Michaels’ biggest order was one of 7,500 pieces for a shampoo brand that wanted plectrums in Christmas packages.

Michael praises the speed, reliability and ease of use of the ValueJet 426UF. "It's just a question of pressing the print button and it does its job. The main advantage of LED UV is that the print is immediately dry – ideal for double-sided orders. With my previous machine, I did not exactly know when the ink was dry and I often left fingerprints, with a failed order as result. Fortunately, I no longer have that problem. Besides, previously I could print up to 30 guitar plectrums at once, but with this Mutoh printer it’s 120. A full table bed requires only 10 minutes of printing time, and I can indicate which guitar picks get which print. The machine's firmware tells me when I have to carry out a new cleaning of the print head and UV lamp. And that is also very simple."

Michael prints standard on polycarbonate. "Mutoh's LED UV inks are very scratch-resistant. There is also an increasing demand for wooden and metal guitar picks; the latter are pre-treated with a metal primer. For plectrums with grip I use the ValueJet Layer Editor Tool; the image or text is then printed as the first layer, whereby a second and third layer with varnish provide the Braille effect."

Within two years, Michael invested in a second ValueJet 426UF. "Business was running very well, so I needed a second printer. I have not looked at other types of LED UV printers any more. After all, I know the quality of this machine and I already have the moulds for it."

Michael is certainly thinking about expanding his product range in the future. "I have some ideas for puzzles and toy blocks; since the machine can print items up to 70 mm high. I also have an engraving machine, with which I, for example, decorate drum sticks. The combination of engraving and printing will certainly lead to beautifully finished products. For now, I’ll stick to music-related creations." 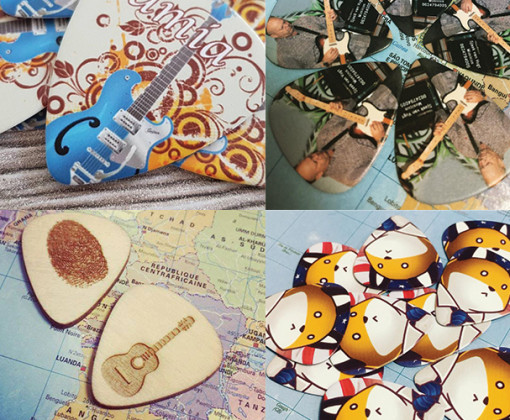 Dutchman Michael Kenis gave up his job as a web designer to fully concentrate on his company EigenPlectrum. Without any knowledge of the printing industry, he invested in two ValueJet 426UF LED UV printers. With these, he could finally achieve the delivery times and quality he craves.

Save the User Story on EigenPlectrum on Your Computer

Discover more user stories
Get in touch with Mutoh. Our team is here to help.
) )